Hint: You may contact seller to check if he has similar listings.

Please tell seller the listing was found on LandCentury.com

All Deposits Are Fully Refundable Within 48 hours

Check Out Our Buyer Protection Guarantee

Check Out Our Affordable Payment Options

This Land For Sale in Jackson, MI Is A Magnificent Homesite On Quiet Street: 222 E High St Jackson, MI 49203… Picture this cheap land with equity as the location of your next house, or your new rental property in Jackson, MI.

Build A New Family Home or Income Producing Rental Property: 222 E High St Jackson, MI, a 0.11 acres residential vacant land lot is one of the cheapest lands for sale in Michigan in this established neighborhood that is primarily made up of medium-sized (three or four bedrooms) to small (studio to two bedrooms) single-family homes and small apartment buildings. Most of the residential real estate is renter occupied. Many of the residences in the E High St / S Elm Ave neighborhood are relatively historic, built, and is a short distance from CMS Energy Headquarters.

Secure Your Jackson, Michigan Address Today: 222 E High St. Jackson, MI 49203 is ideal for a custom build home for personal use or rental income with the right builder with nearby schools include McCulloch School, T.A. Wilson Academy, and St Mary Star Of The Sea School. Nearby coffee shops include Coffee Express, Cooper Street Coffee, and BZB Cafe. Nearby restaurants include Happy’s Pizza, Domino’s Pizza, and Subway.

DRIVE-BY ANYTIME… Take A Tour, You Won’t Be Disappointed.

Jackson County is one of 83 counties in the State of Michigan that is located in Jackson, MI, with the county seat being Jackson. The county was set off in 1829 and organized in 1832. It is named for U.S. President Andrew Jackson and considered to be one of Michigan’s “Cabinet counties”, named for members of Jackson’s Cabinet. 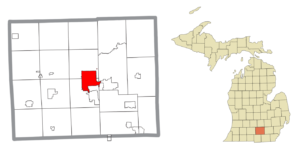 The Cost of Living in Jackson, MI is -3.9% lower than the National Average.

We Can Show You More About:

✔ Buying Land For As Little As $0 Down

We help land buyers save countless searching hours and thousands in marketing costs and access New York land at wholesale prices with:

✔ No Realtors, No Commissions

For more information go to www.WeSellNewYorkLand.com and see other available Residential, Commercial, & Rural Properties valued below $100,000 that are not on the MLS.

We look forward to talking soon 🙂,

The information within this listing is posted by a private or third-party seller and we do not guarantee the accuracy of the information enclosed. We encourage to always verify ownership and property details listed. As a precaution, due diligence in any real estate transaction is encouraged and closing through a verified title company is advised. To the maximum extent permitted by law we do not accept any responsibility to any person for the accuracy of the information herein.

Cheap land near you

Not a member yet? Register

If you feel that you have been a victim of real estate fraud, there are many resources available for you as the victim. Your first step is to contact the local District Attorney’s office and report the incident. Our office will stand by you and provide any relevant information to support your claim. Here are additional agencies that can assist you and provide more resources:

Please tell seller the listing was found on LandCentury.com

Receive a call back and learn more about this listing.